At the end of december 2019, a new tv show has appeared on Netflix : I’m talking about The Witcher. It is adapted from the books of Andrzej Sapkowski, which are also the original material of the games The Witcher. Since I am used to appreciate this kind of medieval stories with magic, I was rather curious to discover the series. I had never played at the games or read the books either., so in that case, I had zero knowledge about the story or the characters when I decided to watch it.

The discover of The Witcher series on Netflix

Here I am, watching the first episode. I have to point out that this first episode is not easy to watch. It’s long, it’s war but we don’t understand why, we discover characters who die at the end… Meh. It does not give the spectator enough curiosity to know what is going on next. Too bad. At the end of the episode, I stopped, and did not watch the second one. But that was without counting on the memes spreading speed on the internet with the sentence « toss a coin to your witcher » that I was surrounded by.

Toss a coin to your witcher

As I wanted to know more about this sentence, it appears to be a song. I’m surprised, because I hadn’t heard any song in the first episode or in the credits. OK, it’s for the science, I’ll watch the second episode, just to be aware of the reference of all these memes. Wow. On this second episode, we discover Jaskier, a really interesting and funny character, and he is the one to sing « toss a coin to your witcher » to claim the feats of Geralt of Rivia and make him more popular amongst humans. Here we are, a comic duo and a catchy song, and I have not mentionned that other interesting characters appeared yet, and know I actually want to watch the whole series. And by the way, i have started learning the song on the guitar.

Apart from being an adaptation from the books, 3 recurrent elements are visible on the Netflix series :

So I had fun creating this diagram below (I hadn't made one since engineering school, if was tough to learn again how to do it ^^) 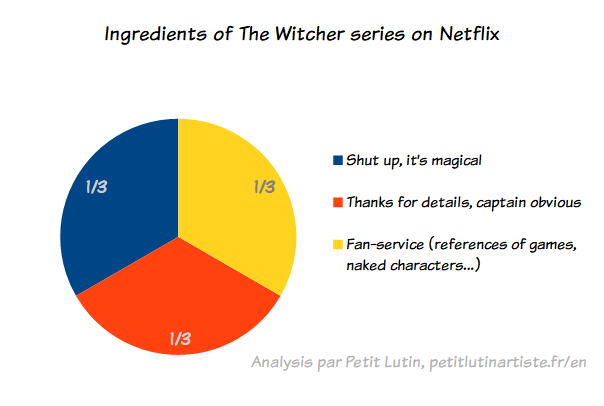 Since the moment I had figured out these 3 themes, that I was not paying attention to the first two, and muted my brain, the show was really pleasant to watch. 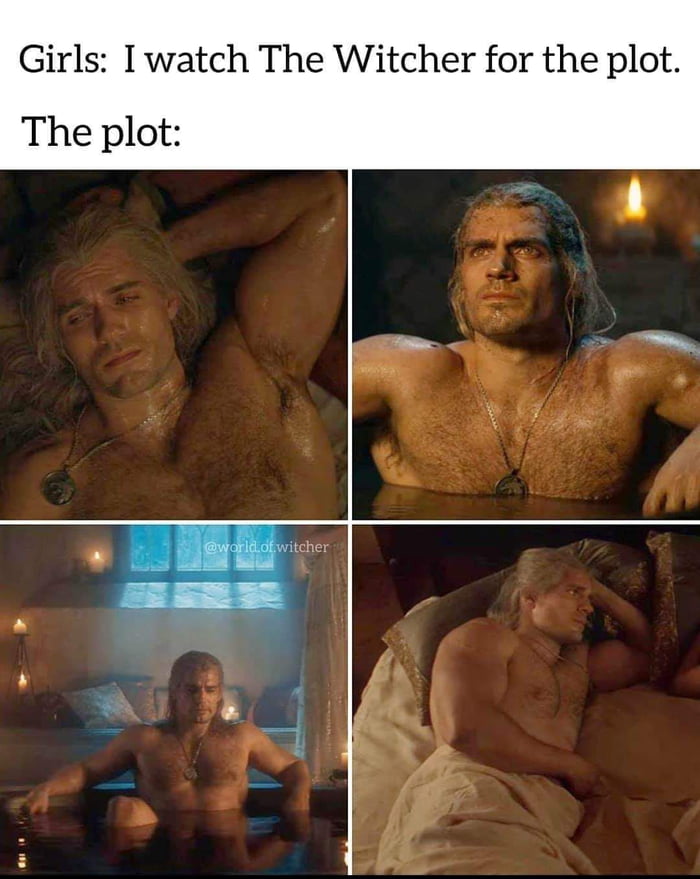 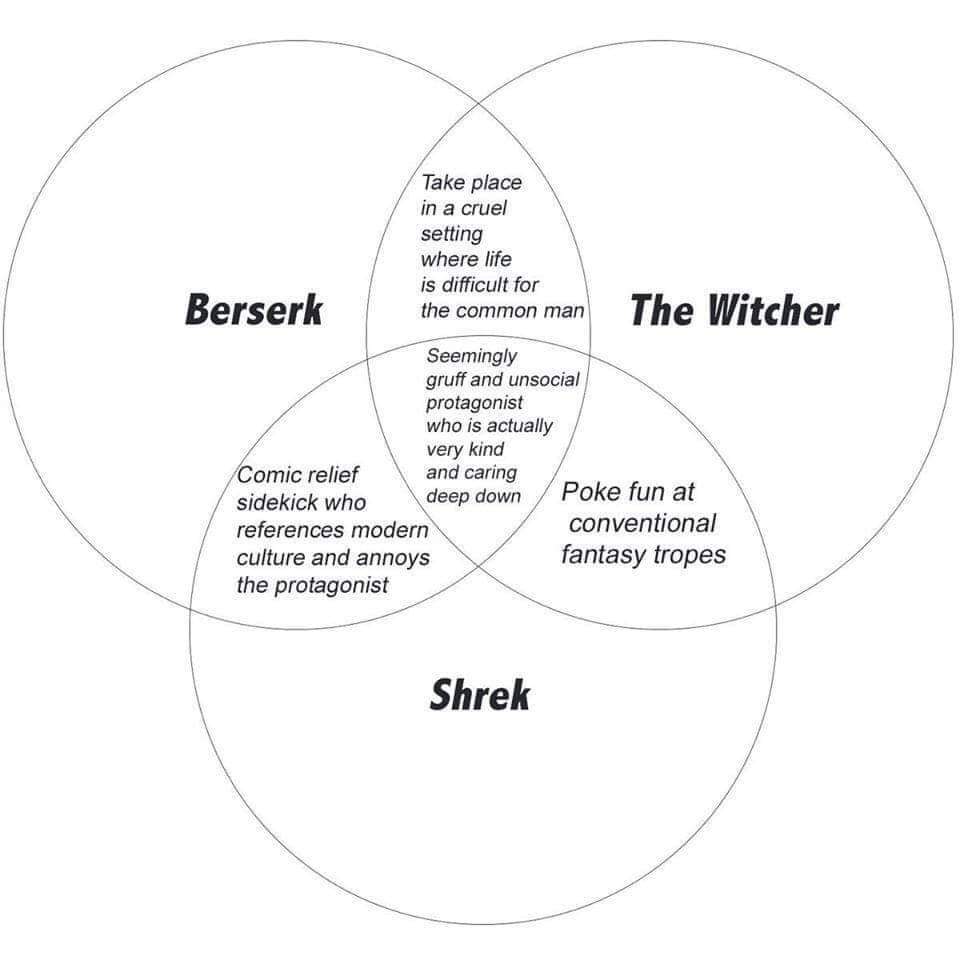 My fanart, a crossover of The Witcher, Final space and Game of thrones

I watched the show in english with french subtitles in order to listen to the original voices. A thing that I noticed is the quantity of the « Hmmmm… Fuck » that Geralt says. OK, he has « more than two-words-of-vocabulary », but still, he is not very talkative. So I had the idea to create an illustration gathering several characters from different stories who have each an iconic punchline.

And here we have a crossover fanart with Geralt of Rivia (The Witcher), Mooncake (Final Space, and animated show which is also on Netflix), and Hodor (A song of ice and fire, Game of Thrones).

As usual, I made this illustration with Krita. 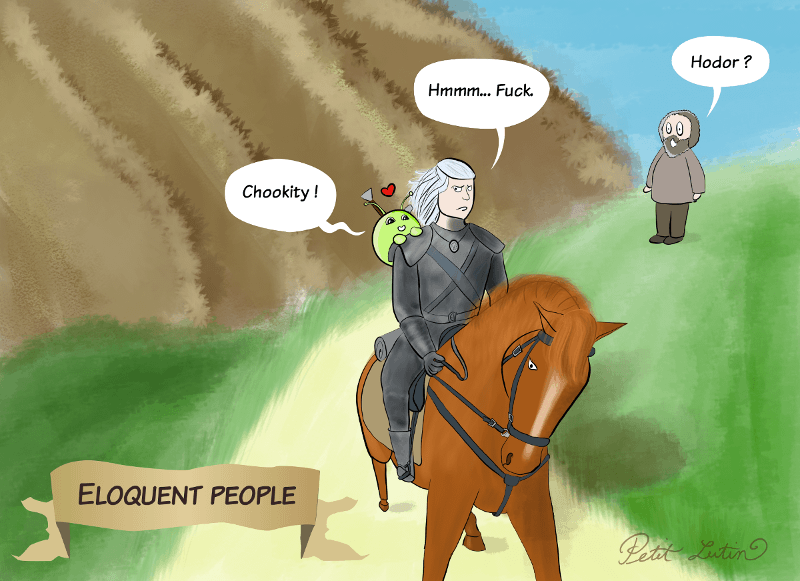 How dare you say that Mooncake is an allegory (to compare with another meme above) ? OK then call me Mooncake of Rivia.

Despites its defects, the Netflix series made me discover and appreciate the universe of the witcher, and gave me the will to know more about it and to understand what is barely or not explained. So I bought the first book, and some elements are now clearer for me. I can understand that adapting these books in a TV show may be tricky, because the narration is complex. Whereas A song of ice and fire could be easy in adapting into Game of Thrones, due to the fact that each chapter is focused on a character, from the point of view of this character, it is really different in the books of The Witcher. In The Witcher, there are groups of chapters that make a chronologic line, but these different chapters are separated with other chapters that take place in the past ! It is first surprising. As a horse rider myself, I really enjoy finding words relative to horse-riding in the books, which is normal when we understand the attention that Geralt pays to his mare, Roach, and also that at that time, having a horse was the only way for people to move from a place to another.

And later, the Lunar New Year on Steam has had a reason of me : I got a bundle for the 3 games The Witcher at 11,85€. A new collection has begun. Well, it was my only purchase during the whole time of winter sales (in France), so I am still proud of me being reasonnable. I started with the first game, which I did not appreciate because of its hard gameplay. Then I started the second one, which is more beautiful, has a great music, and the gameplay being closer to current games (spamming the attack button to inflict damages), I enjoy it more.

It was not assured at the beginning, but I am now a fangirl I guess.

Toss a coin to your witcher : the song
Funny moments between Geralt and Jaskier, with spoilers
Funny noises of Mooncake, with "chookity" and "ooooh", with spoils

Have you watched the Witcher on Netflix ? What do you think about it ?

« Going for a walk

Rss feed of the article's comments